If all the registers of the special effect make-up are asked again ….

As a side event of the WBF – World Bodypainting Festival, it is already a tradition to produce a party for the friends of SFX Make Up Effects as well. With Senjo-Color as sponsor, the make-up teams, special effect colors, latex aesthetics and lots of movie blood are in good hands. The zombie walk took place for the third time and was one of the most beautiful we have ever accompanied. That was due to the many helpers as well as the enthusiastic big and small models. Whole families took the opportunity to be transformed by professionals into beings of the shadow worlds. 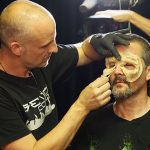 Klagenfurt became a zombie city for one night. On September 8th the Bodypainting Festival Tenerife starts into the next round. A team of Senjo Color is on site and supports organizer Maike Karrer with a sponsoring. In the picturesque island idyll of the […]

Preview: For the fourth time this year the bodypainting family starts in a body painting weekend on the sunny island of Usedom. The Seebad Heringsdorf will be especially colorful from 19th to 21st of August […]

The Masquerade is a contest and at the same time a Meet & Learn Event for Bodypainting und Facepainting artist from the entire Europe. On Saturday, 5.11.2016 discussions about different panting technics, motives and events […]